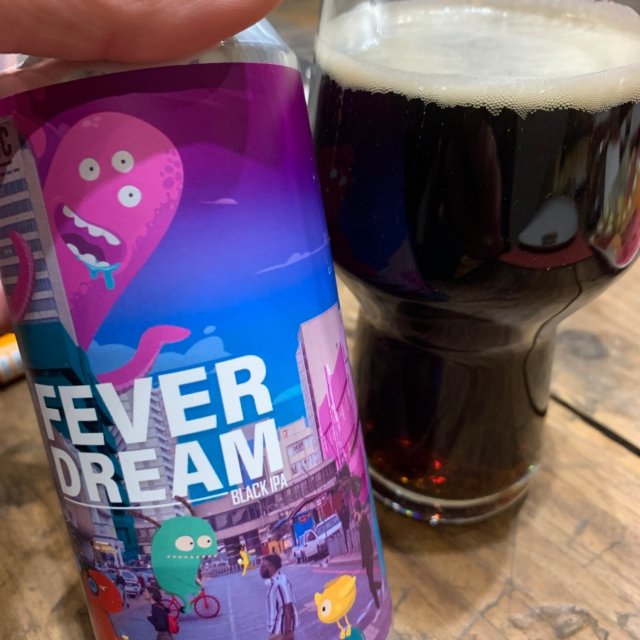 As you are no doubt aware IPA is an acronym for India Pale Ale. Well RHBC have just launched their Fever Dream Black IPA and it is far from pale.

Niall Cook, the Master Brewer at RHBC, has become a local brewing legend not least because of his willingness to experiment and produce a host of exceptional, if unusual, brews.  Fever Dream is his latest masterpiece.

What is a Black IPA?

A black IPA is a bit of an oxymoron and has caused a lot of debate in the beer making industry.  It is also known as a Cascadian Dark Ale, American Black Ale and an Indian Black Ale.

However, it is Black IPA that has become most acceptable in brewing and retail circles.

Essentially the darker malts used in the brewing process make this IPA as dark as a stout but on the nose and pallet, it is closer to a West Coast IPA.

Thanks to the dark malts you can also expect a bit of chocolate, coffee and burnt toast too.

RHBC has a tradition of having an artist design their label so that it includes some local (Gqaberha) content.

Fever Dream is no exception and Ashley Reid, a graphic designer and animator, was asked to come up with something appropriate.

Ashley took a photograph of a pedestrian crossing in Govan Mbeki Ave with a couple of other local artists stepping across the road.  He then overlaid the image with a bunch of monsters that one would expect to see in a, well, feverish dream!

According to the packaging, the hops include Cascade, Citra and Simcoe while the malt is Pilsner, Carahell and Carafa Special. It is a relatively strong beer with an alcohol content of 6.3%.

I have spent some time sampling this unusual brew and find the hops to be strong on the nose and the palate to be satisfyingly bitter.  There is also a delicious taste of 90% Cocoa Chocolate and a long, lingering naartjie peel citrus after tatste.

Can’t wait for the next round!