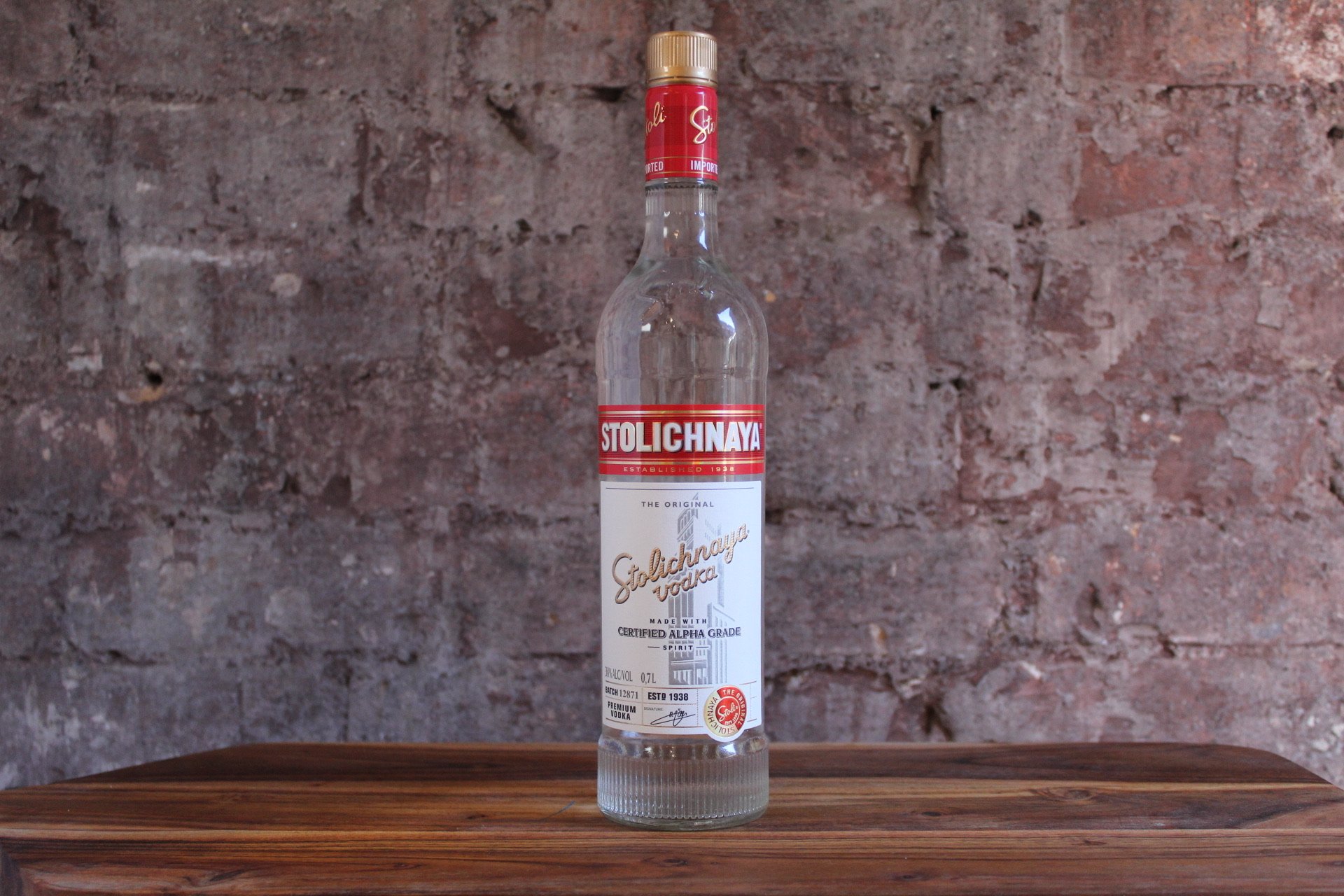 Stolichnaya Vodka is, as the name suggests, a Russian Vodka.  It has is origins in the Soviet era and was first labeled under its current name in 1938, just before the Nazis invaded.

The Soviet era is synonymous with poor quality and low standards – unless it was a key part of Soviet culture in which case it was usually the best of its kind in the world.  Beluga Caviar, AK 47s, Cosmonauts and, of course Stolichnaya Vodka, are cases in point.

Vodka, perhaps more than any anything else, symbolizes the old USSR.  Both are bleak but strong, simple but mysterious with no frills and a kick that destabilizes the senses (or governments).

Affectionately known as Stoli Vodka by the Ruskies, the Pepsi Cola Company thought that it was the best vodka available and, in the heart of the Cold War, managed to trade Pepsi for Stoli!

I think it’s now pretty obvious that Stoli is something very special after having survived Stalin, World War2 and the Cold War.

Like all things Soviet, Stoli was originally state owned and as with many Soviet enterprises it mysteriously entered the private sector in the hands of an oligarch. At this point it became one of the most sought after vodkas in the US of A.

Of course, once the Yanks were involved the austere, rustic brand began to be transformed.  It’s a bit like the ugly duckling story.  The inherent beauty manifested itself when it came of age and its attractiveness and desirability increased exponentially.

Today Stoli Vodka can be found all around the world including here at the very tip of the African Continent.

Thanks to free enterprise and Western frivolity Stoli Vodka now comes in a host of flavours including  Stoli Vanil, Blueberi, Razberi, and Strasberi to name but a few.

Thankfully the The Original is still as stark, strong and pure as only a good vodka connoisseur would appreciate.  One version of Stoli that this writer approves of is the Elit.  This is an ever smoother version of the Iron Curtain survivor.

What makes Stoli so good?

Stolichnaya Vodka is only distilled from wheat and rye grown in the fertile Tambov area of Russia.  These grains are distilled three times in the state of the art Talvis Distillery located in the same region.  Infused with the dark, sour and spicy flavors of the region, the raw spirit is shipped to Riga, the capital city of Latvia, on the Baltic Sea.

Latvia, like Russia, was part of the Soviet Union. This tiny country is known for its beautiful Birch forests and skilled craftsman.  At the Latvijas Balzams, another state of the art distilling company, the raw spirit goes through four filtration processes in quartz sand and Birchwood charcoal and has  pure artisanal water added to produce its 43% alcohol volume.  It is now a very smooth Vodka.

The Original Stoli Vodka is crystal-clear in colour.

The promotional tasting notes say that the aroma is that of marshmallow, mineral and mild fruit peel.  They add that the palate has a soft, supple entry that leads to a smooth, medium-bodied palate with pastry frosting, talc and citrus rind flavours.  They conclude that it finishes with a clean, lightly sweet, sugar dust, wet straw and balanced pepper fade.

At the 2021 Thirsty Travel Annual Spirit Tasting event Stoli Vodka attracted a lot of attention mostly because of its quality Russian pedigree.

“I like that this is a Russian Vodka and that it also comes with a great story.  The nose is deceptively light and while the palate is all that I would expect from a Russian Vodka – strong, clean and slightly harsh.  The aftertaste is smooth but it still has that essential Vodka bight off the first sip.”

“There is an almost sweet taste to this vodka and it is very smooth.  I enjoyed it best on the rocks.  I could happily sip on this vodka as I would on a Single Malt Whisky.”

“A versatile Vodka.  It is very good neat, on the rocks or with orange juice. I would like to spend a bit more time test driving a few cocktails with Stoli Vodka and can my cabinet being stocked  with a bottle or two.”

Build over ice in a copper mug & garnish with a lime wedge.