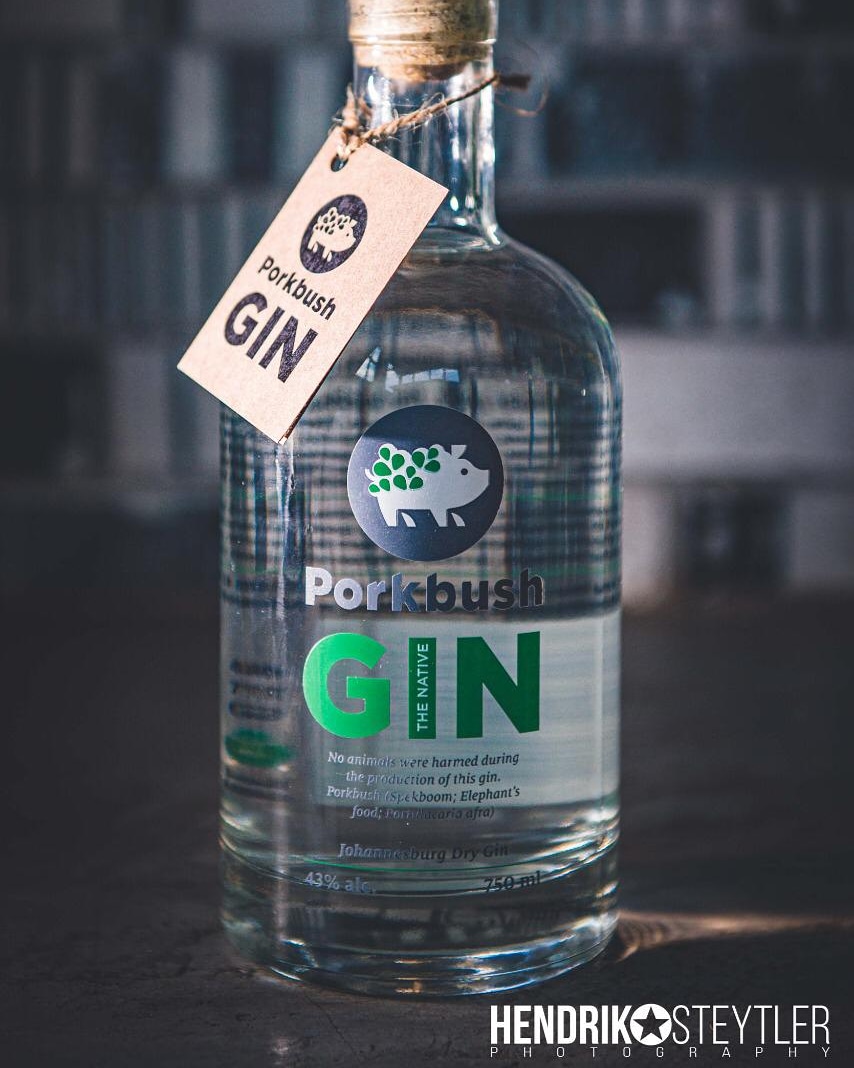 Porkbush Gin is a Johannesburg Dry Gin meaning that it has followed the classic London Style Dry Gin distillation process.

In essence this means that the botanicals in the gin are mysteriously subtle on the nose and the palate and this is precisely what I like about Porkbush Gin.

Neat, on the rocks or with a touch of tonic and soda water, I really enjoyed this gin.  In fact my advice is to not spoil its delicious flavors by adding an excessive amount of tonic or lemon or any other mix for that matter.

At the Thirsty Traveler 2021 Annual Spirit Tasting Porkbush Gin generated a lot of interest mostly because of its unusual name.  Some participants, who did not know the meaning of the name or know the spirits provenance, where reluctant to take a tipple.

However, once tasted, the comments where very favorable and included; “An excellent dry gin.  Loved exploring the aromas and flavors” and “Neat, clean and very palatable just as one would expect from a top quality dry gin.”

As with all spirits classified as gin, juniper must be the dominant botanical and, in the case of this gin the wonderful Porkbush, also known as Spekboom or Elephants Food is the next biggest contributor.

Spekboom, or scientifically speaking Portulacaria Afra, is indigenous to the Eastern Cape of South Africa where it is one of the favorite foods of elephants.  Drought resistant and exceptionally fast growing after a good rain, this amazing plant absorbs more carbon dioxide per volume of plant than any other species on the planet.

Porkbush is one of the best combatants in the fight against excessive carbon emissions and global warming.

The leaves of the Spekboom are tarty, and, after a downpour, plump and juicy – and thus they derive their name.  They are edible and high in Vitamin C and where regularly consumed by the residents of the Eastern Cape a hundred or more years ago.

The story behind Porkbush Gin

Nina and Jacques Scheepers have a passion for gin and for conservation and so they decided to combine the two and produce a gin with a Spekboom flavor.

They approached Curtis Van Biljon, owner of Still 33 in Johannesburg, for assistance and between the three of them they have created a superb gin.

Porkbush is an unusual name for a gin and I asked Nina if they produced the gin to promote conservation and the Spekboom in particular or if they were gin fans and wanted something different.

“We are very big gin fans. So the motivation behind the gin is twofold. Firstly, we wanted to create a product with a story behind the brand, and secondly, we wanted to make sure that people would love the fresh taste of a Porkbush gin. We don’t want the success of the gin to be dependent on the conservation story but on the wonderful taste infused from the plant,” replied Nina.

Much of the promotional material that I have read about Porkbush Gin refers to their support of the now defunct Wonder Plant and their Great Labyrinth of Africa initiative.  I asked Nina if they would look for alternative projects to support.

She answered, “We believe there will be great projects in future in which we can become involved, but in the mean time we will continue to create awareness around this amazing plant that does wonders for the environment.”

Being a London Style Dry Gin, Porkbush is a distilled gin, not a compound or bathtub gin. The Spekboom, and other botanicals, are macerated in neutral spirits and distilled separately at a lower temperature so as not to destroy the delicate essential oils.

The juniper berries originate from the Balkans, Bulgaria and Italy and other botanicals include coriander, cubeb and lemon which are vapor infused during distillation.

The distillates are then combined during proofing and at no time is sugar added thus making it a perfectly dry gin. As one would expect, this a crystal clear gin.

On the nose Porkbush is a juniper forward gin and so this is the first note of the aroma symphony, followed by the fresh lemon and soft Spekboom scent. Spicy cubeb and coriander are less dominant than the fragrant lemon and Spekboom which is accentuated as the alcohol continues to evaporate.

On the palette  the juniper and lemon are immediately identifiable. Then the Spekboom adds a lemongrass and pine quality to compliment the juniper, followed by a soft earthiness. The cubeb completes the flavor experience with a spicy fresh aftertaste.

Where to find Porkbush Gin