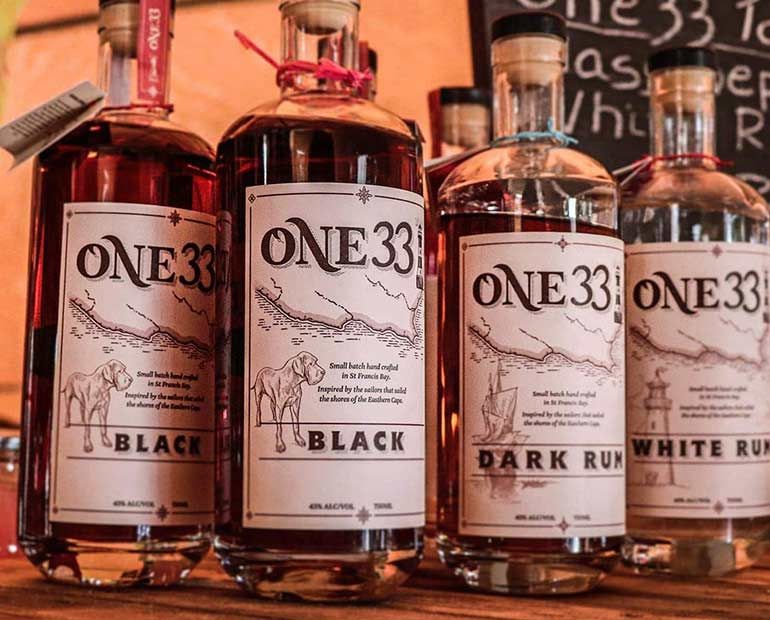 One33 Craft Distillery and Cheesery is a dream come true

As a foodie, One33 Craft Distillery and Cheesery, is a dream come true.  Not just for myself and like-minded palette conscious connoisseurs but also for Gerda and Rodney Milford, the owners of this wonderful distillery, coffee shop and eatery.

Located just across the Krom River bridge, on the St Francis Bay side, One33 Craft Distillery and Cheesery is easy to locate, has ample parking and a lovely setting.

Inspiration for One33 Rum

Rodney says, “One33 craft rum is inspired by the freshness and beauty of the Eastern Cape, and honours the Eastern Cape’s early inhabitants, its treacherous coast and its rich fauna and flora.”

Gerda adds, “We dreamed of creating a place where locals and tourists could meet and share stories over our hand crafted produce.  This dream has come to fulfilment in our rum pub, coffee shop and our platters that showcase our cheese that we make here.”

The One33 rum is blended from two types of South African molasses and fermented using two types of yeast to give it a unique flavour and depth.

“The main yeast that we use is also preferred by the premium Caribbean and Central America rum producers and is complemented with a red wine yeast to add fruit flavours and tones,” says Rodney.

The water used in the distillation process comes from a borehole on the distillery, drawing water from the Sand River – a unique headland dune system stretching from Oyster Bay to St Francis Bay.

Rodney says, “One33 White is a smooth, light bodied rum, slightly sweet in flavour with subtle tones of molasses.” “One33 White can be enjoyed on the rocks and is a popular choice for rum cocktails such as Mojitos, Daiquiris or Cuba Libres,” says Gerda.

Distillers and craft enthusiasts will be interested to hear that two types of South African molasses are aged separately for the dark rum. One type of molasses is aged in 100 litre French oak wine barrels to give a high surface area to volume ratio, the second type of molasses is aged in glass demijohns using specially toasted French oak chips. The two aged components are then blended together after six months, giving the One33 Dark a rich textured finish that appeals to both rum and whiskey drinkers.

“We were very pleased that our One33 Dark received a gold medal for our in the 2019 Michelangelo International Wine and Spirits Awards” says Rodney.

One33 Black mixed spirit is aged in Virginian oak bourbon barrels, together with a fortified wine-based spirit. One33 Black is refreshing and is slightly sweet with a full balance of flavour and aromas.

One33 Sea Vista Gin and Vodka

“While our initial focus was on rum, we soon also branched out to include gin and vodka” says Rodney.

One33 Sea Vista Gin has a mild flavour and aroma, which comes from hand crafted alcohol and infused with a selection of fine botanicals together with One33’s signature Khoisan Sour Fig. One33 Sea Vista gets its name from the Sea Vista settlement in the St Francis Bay area, and the label incorporates artwork from a local Sea Vista artist.

The One33 range is also available in recycled bottles in the St Francis Bay area. “Re-using bottles makes a small but important contribution to reducing waste and energy, and supports job creation through the recycling of the glass bottles.  The cost savings are also passed down to the community” says Rodney.

All One33 Distillery spirits may be ordered from their online shop.  Click here to place your order.

Copper Wine & Craft Spirits are distributors of One33 Distillery’s products.