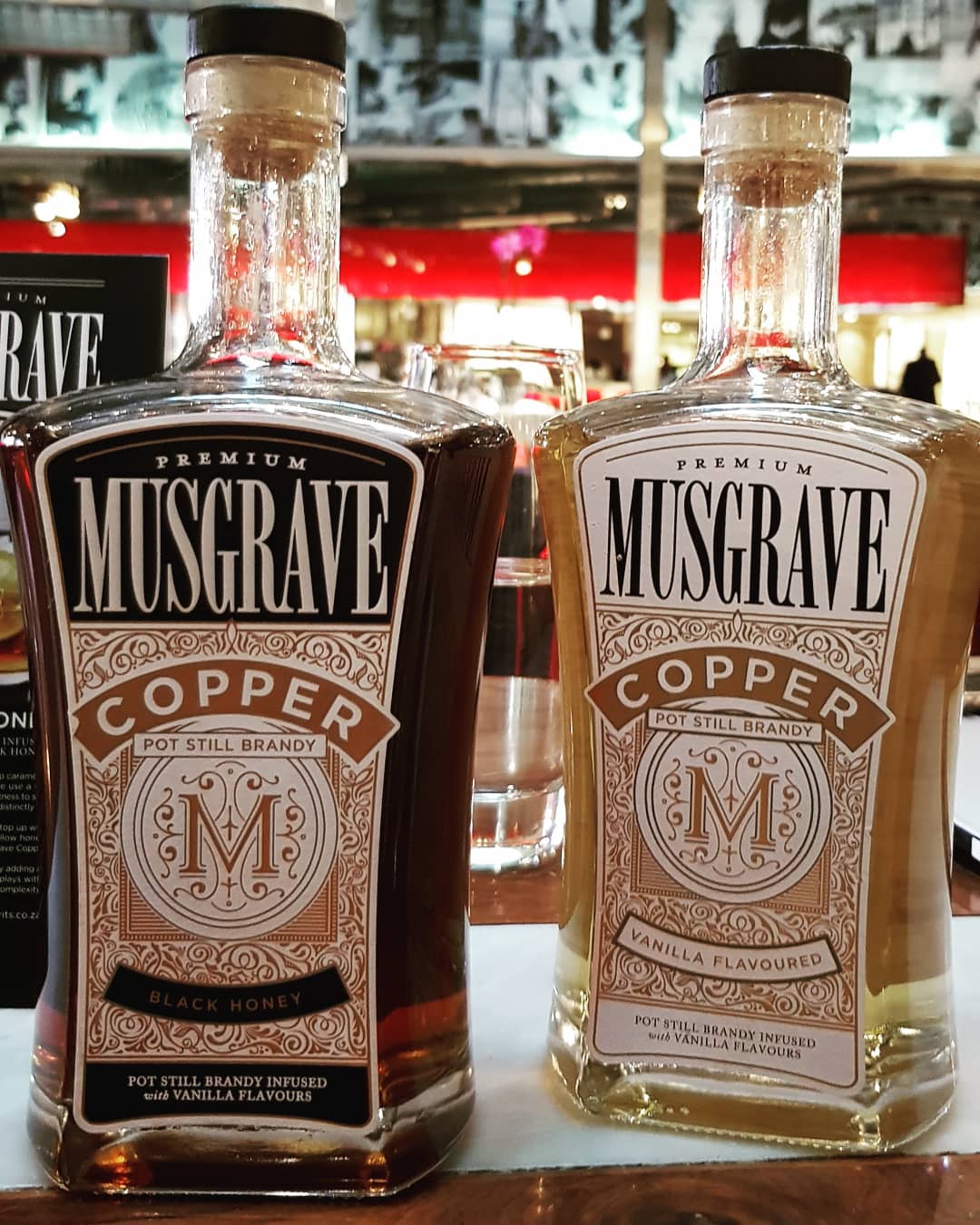 Musgrave are now producing Copper Pot Still Brandies.  I have long been a fan of Musgrave Gin and have written about them in the past so it was with great excitement that I acquired my first bottles of the Musgrave Brandy.

Simone Musgrave, the owner of the Musgrave brand, has become a legend in distilling circles in South Africa.  Her attention to detail, sense of adventure and attraction for the unusual has resulted in some of the best gins in the country.

Brandy in South Africa is known as a man’s drink and has plenty of connotations linked to overdoses of testosterone.  It may thus seem unusual that a woman has become involved in brandy making.

However, the Musgrave Brandy is not the kind that you mix with large amounts of Coke and swill back in quantities that show no appreciation for quality.

There are two The Musgrave Copper Pot Still Brandies.  The first is infused with Vanilla Flavours and other with Black Honey.  These are brandies that may be savoured neat, on the rocks or with a special mix to suite your pallet.

I introduced the Musgrave Brandies at the recent Thirsty Traveler Winter Spirit Tasting and this is what we discovered.

Designed to be an easy drinking brandy that is a world apart from the usual mass market brandies, the Vanilla flavours encourage experimentation with mixers and other flavours.

The nose of this brandy is distinctively vanilla and strongly aromatic.  Just a wiff of this brandy and my taste buds become activated!  The colour is a soft gold.

As is our tradition at the tasting we sample the spirit neat, then on the rocks and the try a variety of mixes.

This brandy can easily be enjoyed neat as one would a liqueur and on the rocks it is good too.  Musgrave recommend mixing it with sparkling water and a slice of fresh orange.

I particularly enjoyed this brandy mixed with a lot of fresh lime crushed with a pestle in the class.

Comments from the tasters included: “Smooth.  Sweet on the palette and a brandy that a lady can enjoy”;  “This is a really good brandy that has been made more enjoyable with Vanilla infusion.”

Of the two, this was my favourite.  Deep caramel in colour and with a nose that reminds one of honey straight of the comb, this brandy is delicious with a long, lingering, rich honey pallet.

The tasting notes say that winter African honey is used as the flavouring and they suggest that a double shot be served over ice, mixed with Fitch and Leeds Spicy Ginger Ale and garnished with a wedge of lime.

This is exactly what I tried and found it superb.

Our lady tasters claimed that this was one of the best brandies that they had sampled and enjoyed the lingering honey taste.

If you enjoy mixing cocktails, then make sure that you have both the Vanilla and the Black Honey Musgrave Brandies in your bar.

Find out how to drink responsibly here.