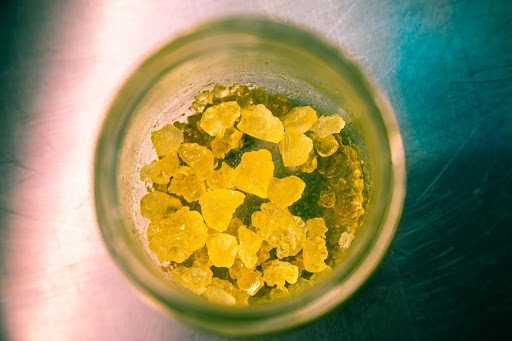 The craze of cannabis has been growing since it became somewhat legal to grow your own. In your own private residence. More and more people are starting to accept it and rather than complain they’ve embraced the cannabis movement in South Africa.

With this growth, some people have tried to experience the plant in different ways. From smoking, vaporizing and extracting to make oils, the evolution of this plant is not slowing down.

There is a  new craze that has come about and it is called dabbing. No, we aren’t talking about the dance craze from a few years ago. What we are talking about is the use of a concentrated extraction form of a strain that gives off a different effect commonly found in smoking cannabis.

Here are the best dab strains South Africa. To find out more about these strains and where you can buy them in south africa follow the link.

So sit tight and enjoy the high.

The term dabbing is the process of melting a concentrated cannabis over a heat source, typically a glass nail, and inhaling the pure vapor with a dab rig or using a vaporizer.

Since there are many different forms of dabs, it’s used as an umbrella term to cover all the different types of concentrates.They can extract non-intoxicating compounds such as CBD, but using strains with a high percentage of THC is mostly used because of the potency and high that comes with it.

Research suggests that dabs can have a THC concentration of 80% when comparing it to traditional raw cannabis is around 18%. So with the correct maths, at a minimum, dabs are four times stronger than a joint. The process of making dabs is something that should be left to experienced providers. But there are many processes to make dabs such as cold press or BHO (Butane Hash Oil) over marijuana. Follow the link for more information on how to make your own butane extraction.

Image by Clear Cannabis on Unsplash

Shatter is a stable and glass like concentrate that will shatter into pieces, thus the meaning around its name. Most forms of shatter are smooth, clear, and solid. It’s known as the purest form of all the different kinds of dabs, that’s why it’s requested the most.

This concentrated form is a lot softer and brittle substance that crumbles easily. A crumble is usually enough for a session, but just don’t pick up the biggest crumble.

Wax strains after being concentrated have a yellow-brownish colour of dab. Wax is smoked commonly using a dab rig or vaporizer and is the stickiest form of concentrates, so we would advise to only use a dab tool to handle it. The best wax strains are normally the stickiest. The word dab actually originates from wax, and refers to smoking a dab of wax.

In some cases concentrates are made with C02 and not Butane and it produces a slightly runny oil that comes in a syringe or a container. It has a different taste than the other forms and it depends on what your personal preference is.

Even though there are tons of forms of producing water hash, the most basic rule of thumb is that the plant is mixed with cold water or ice, then manually or mechanically shifted in order to break off the brittle trichome heads. Then left to dry and harden forming the extraction known as hash.

The most recent type of concentrate and probably the most famous form, rosin is extracted dried mariuana buds, trim, or lower-gra water hash. It’s actually an easy process used to make it since all you would need is a hair straightener, parchment paper, and some pressure applied by hand. It resembles a golden form of shatter or an oil-like extract.

Image by Jeff W on Unsplash

Now that you have some information about dabbing, what it is and its different types, let’s take a look at strains. A good dab weed strain will improve your high and the taste and yield after the extraction process. So picking a dab strain is just as important as choosing your form of concentrate.

Probably the best dabs strains to use if you have never tried a dabbing before. As a first experience, it’s smooth and sweet and gives you a great potent high. It packs a real good punch with it’s THC level being between 22%-29% and the dab reatians all the goodness that the plant yields.

If you’re looking for a strong high that acts quickly and lasts long, then sour diesel is the one for you. It’s a very intricate process to dabbing, and should at all times be dosed correctly. If wrongly dosed, it can lead to anxiety so remember that a small amount goes a long way. Preferably only regular smokers should try this one.

What’s a list of strains without some cheese? Baddaz is a globally renowned dab strain, classed as one of the best when it comes to taste. A combination of aroma that leaves you tasting spice and herbal flavours. A strong strain for dabbing but will leave you energetic and with a great high. Definitely a legendary strain.

If you are well-versed in Italian cuisine, then this name would ring a bell. It’s name is based on the limoncello, as the taste of this strain leaves you with a similar taste, a lemony tang. Get a good euphoric high that hits immediately after you inhale. The actual plant is rich in buds if grown the right way, but can take a long time to harvest.

Sour tsunami is actually a lovechild from Sour Diesel. It’s mostly a CBD high strain but it contains the high qualities of it’s parent strain. The strain has a high, very similar to what you would get from indica and is an excellent pain reliever. It’s said to have a toke from this when feeling physical discomfort like nausea and period cramps.

Image by Drew Taylor on Unsplash

I’m sure that this isn’t the last experiment that we’ll have with cannabis. Since we already have Durban Poison beer, I’m sure we’ll see marijuana used in more and more products as regulations ease and the plant becomes more accepted.

Since dabbing has so many forms and different concentrates, I’m sure you’ll be able to discover your favourite as well as find your favourite strain.
Smokers Tip: Snoop Dogg the infamous Godfather of weed loves a bit of Gin and Juice with his smokes, why not find your own favourite here.